Celebrating Neurodiversity in the Workplace: The Dell example

Celebrating Neurodiversity in the Workplace: The Dell Example

There is a tremendous amount of untapped talent among those in the autism spectrum community who stand ready and able to contribute to the workforce. Thanks to an increasing number of companies who value a culture of diversity and inclusion and go the distance in implementing the proper accommodations, there is less untapped talent and more bright, motivated autistic folks at work than there would be otherwise. Dell Technologies is one such company.

It comes as no surprise that Dell has chosen to pursue a culture of neurodiversity. CEO Michael Dell has been quoted as saying “diversity and inclusion helps drive innovation and growth, and is critical to the long-term success of our company. I'm proud of the legacy we are building as an employer of choice for all.” New ideas from a diversity of perspectives result in a greater capacity for problem solving. New ways of thinking are incorporated into the technology offerings, fostering greater accessibility. And the autistic employees benefit as well. As such, Dell's Autism Hiring Program is a win-win-win proposition: for the company, for its people and for its customers.

When asked to speak about their employment experience at Dell, a few of the autistic members of Dell’s workforce have had wonderful things to say, as have their nonautistic colleagues. These folks admit to being eager to learn and to try new things. They value having an impact on those around them and being able to teach others. Dell affords them these opportunities, and taking advantage of them instills in them a sense of fulfillment, empowerment, belonging and connectivity with their colleagues. The business impact of these outcomes is the enhancement of team spirit, cohesion and focus.

There are abilities which are prevalent among many on the autism spectrum, including me, which lend themselves well to careers in technology. Attention to detail, commitment to quality and consistency and capacities for analytical and "outside the box" thinking are common. I would not be half the information technology consultant I am today if it weren’t for these skills and work habits. With respect to commitment and consistency, there is a correlation between these and longevity at a company. Dell reports a significantly lower turnover rate among its autistic employees. I am in my 25th year of employment at my company, largely because I see value and take pride in loyalty, and because I prefer the predictability and structure associated with going to the same workplace, working with familiar people and attending to the same kinds of tasks day after day. The evolution of the technology with which my colleagues and I work has kept the job interesting and stimulating over the long term.

When Dell launched their Autism Hiring Program in 2018, they recognized the need to re-think the hiring process and how to best attract talent. They chose to partner with an organization connected to the Autism Resource Center (ARC) of Philadelphia, known as Neurodiversity in the Workplace (NITW) in order to achieve these goals. The Neurodiversity in the Workplace Initiative connects autistic folks to jobs that fit their skill sets. NITW partners with Human Resources departments in helping to identify the right candidate(s) for the company’s open position(s). They support managers and other nonautistic co-workers as to how to best interact and work with new autistic hires.

Candidates are thoroughly prepared for long-term careers. They are trained to advocate for themselves which promotes independence. They learn how to manage differences between how they and their coworkers process sensory input. Emotional regulation and expression, understanding the unwritten rules of the workplace, teamwork with managers and colleagues, and navigating e-communications are also addressed. NITW helps implement an onboarding process after the hire is made, providing onsite training as necessary to ensure success. Finally, the organization’s work in supporting a neurodiverse workforce is promoted to the community.

Dell's Autism Hiring Program was first put to the test at one of their Massachusetts-based locations and was later implemented at the company’s headquarters in Texas as a result of its initial success. The program allows candidates to demonstrate their skills outside the traditional job interview which is often problematic for folks on the spectrum. Interview proficiency requires both strong verbal and nonverbal communication skills. The latter is a particularly common challenge for autistic people, and I am no exception.

Throughout my youthful years and into adulthood, I didn’t even understand what nonverbal communication entails, much less be competent at it. I could only comprehend spoken words and only the most obvious gestures, like how somebody’s face looks when she is angry or overly excited. Relatively subtle and nuanced forms of nonverbal communication almost always eluded me, and so I would be unable to respond accordingly. As such, I did not fare well when it came to dating and romance. I can’t even recall having kissed a woman with my eyes closed during my bachelor days, not once. If I did, it was purely by coincidence, and without any awareness of what I was actually doing. Considering that a date and an interview have much in common, certainly with respect to body language, it becomes evident that a traditional job interview will often fall short of doing an autistic candidate justice, leading to unfavorable and misleading yet all too important first impressions. Kudos to Dell Technologies for recognizing this reality and for offering a more equitable path to employment.

Candidates entering the Autism Hiring Program are initially screened for their interest in the open employment opportunities and for the pertinent skills, experience and qualifications. If they qualify, they are invited to a two-week skills assessment/mentorship session. Those who succeed move on to a 12-week Summer internship from which several have been hired as full-time Dell employees. Cyber-Security, Artificial Intelligence and Software Engineering are among the technology areas that are taught during the internship. Ample opportunity exists within this kind of framework for candidates to showcase their talents, prove what they are capable of, build self-esteem and grow along the way. No high stakes “all or nothing” job interview which, if it happened, could very well deny the organization of a worthy asset.

Now is as good a time as any for more companies to follow Dell Technologies’ example and that of other companies who implement accommodations for neurodiversity in the workplace. Folks on the autism spectrum and others who are neurologically different (including people diagnosed with ADHD) are all too often overlooked because they are typically not thought about by those who make recruiting and hiring decisions. And yet, neurodivergent people who are able and ready to get to work represent phenomenal levels of untapped talent and potential eagerly waiting to be put to use. Consequently, the unemployment rate is regrettably and disproportionately too high among neurodiverse individuals. Now is the time to re-imagine who can be successful members of the workforce and how to best bring them in. 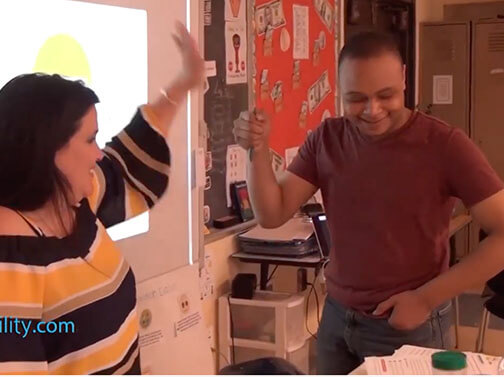 Teachers can prompt their students to dance when the correct answer is selected, positively reinforcing their success as a class or team.

Meet Digitability's very own Dana Steinwart and her former student Grace Walline. They speak about how her program helped Grace get hired and how work life has been.